It was 34 degrees F with a stiff south breeze at 7:38 this morning as I set out on Shadow for Meadowbrook Park.

Felt heavy with the sameness for so long of the grey-brown land-and-sky-scape, which did little to lift my current thoughts of dismay. From feeling like I’ve not been giving enough time to my yoga practice or to friends and family, to thoughts of friends with chronic illness, to the struggles of my children, relationships, our principle-less (nihilist!) president, to the loss of trees from climate change…. 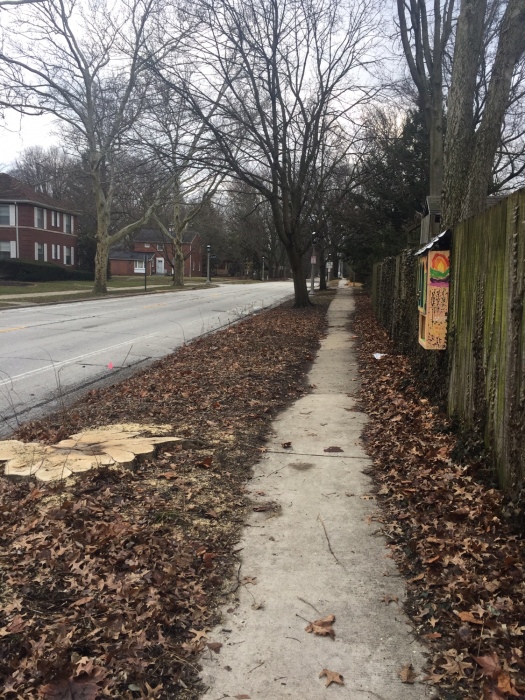 For the first part of this morning’s ride, felt like I was under a heavy, grey mass.

Seeing the water rush through McCullough Creek was a little victory. 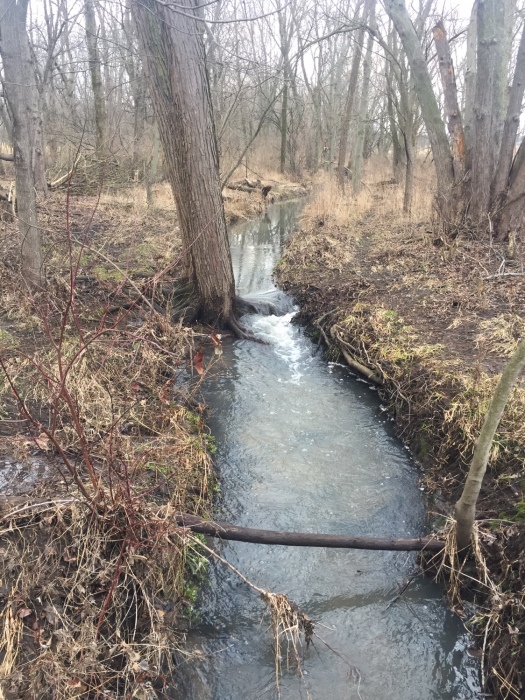 Seeing the clouds break up was a little victory.

They reminded me that if earthquakes and floods and wars have not extinguished all joy so far, I trust that somehow it will survive, if we are willing to accept small victories.

On the way back from the prairie saw wingstem remains standing in front of some tree branches,

Farther along, at the Meadowbrook sensory garden, pioneer snowdrops were emerging. 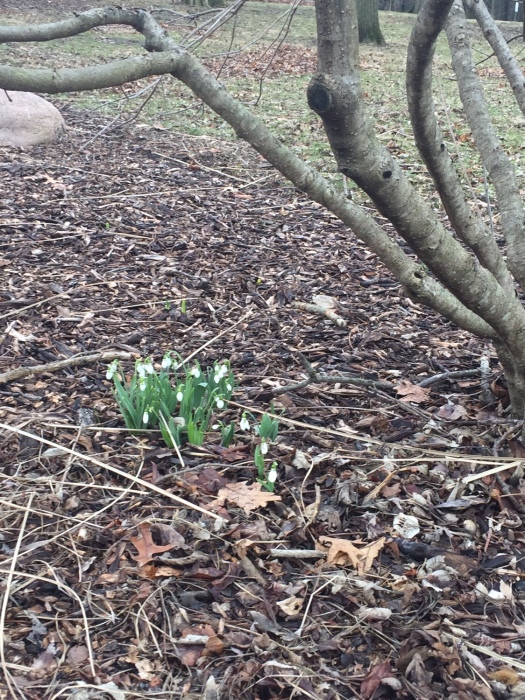 Oh brave, welcome harbingers of the inexorable (so far!) renewal of life!

At 7:15 this morning it was somewhere around 30 degrees and clear, at first, though a little later light clouds began to congeal like a precipitate in a chemistry experiment.

Rode on Shadow toward Meadowbrook Park, a familiar trip. Felt a little sad about the lately increasing stretches between rides and posts but was glad to be riding, connected for whatever amount of time to the outside world. 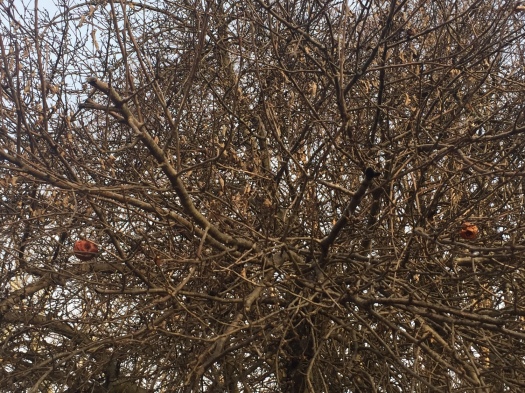 Then proceeded on Race Street almost to Windsor, where I stopped for a portrait of late winter-central Illinois: 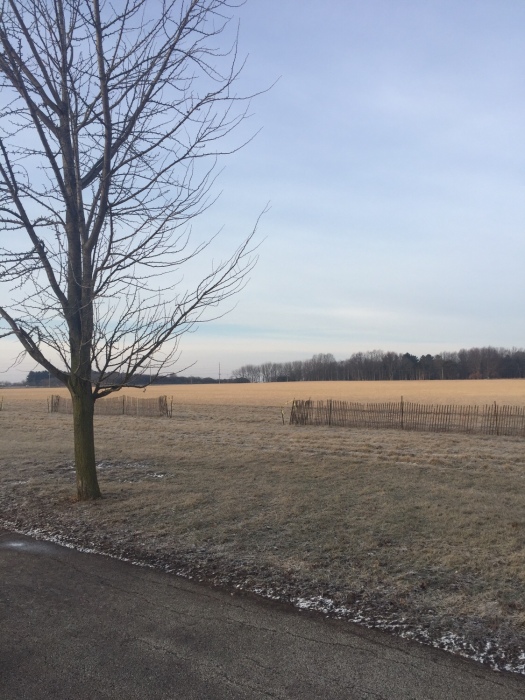 At Meadowbrook stopped at the “wonky Christmas tree ”

and at a little shrubby tree with a low crown of dense branches.

And made the usual stop to view McCullough and Douglas creeks, their edges iced, from the rabbit-

Circled around Meadowbrook prairie, crossed McCullough Creek at the Windsor/Vine St. bridge then cut back along the creek to check on the growth around some trees that beavers had worked on in 2012 or so. 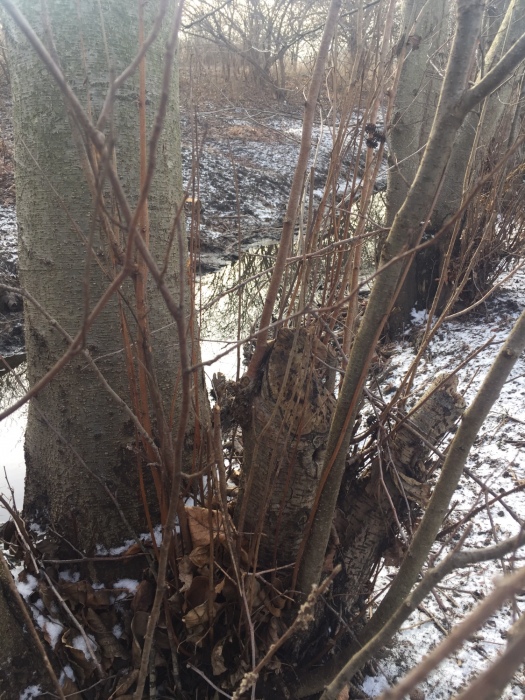 Many shoots of branches had arisen around the base of the stumps, and the growth of the remaining trunk was obvious. Soon it will be hard to tell that beavers had worked here.

Nearby noticed a number of dead trees, one still surrounded at the base by fencing to protect it from beavers.

But, alas, other ravages (not sure exactly what, but I’m guessing it was drought-related) had taken it. Wondered what the park would look like in the next few years.

There always is some kind of change to observe. 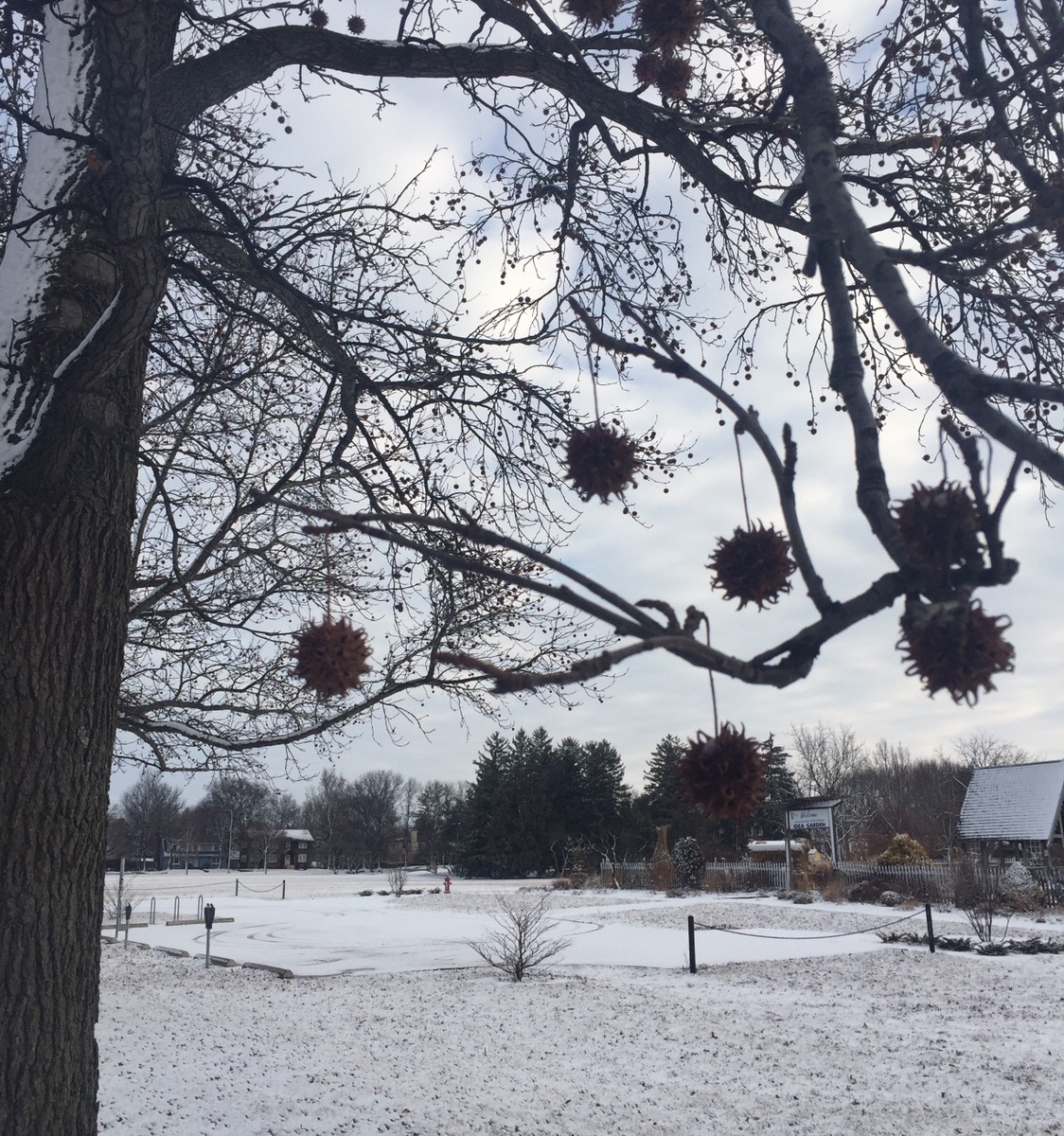 It was 32 degrees F under a cover of textured clouds at 7:45 this morning, light snow having fallen overnight. 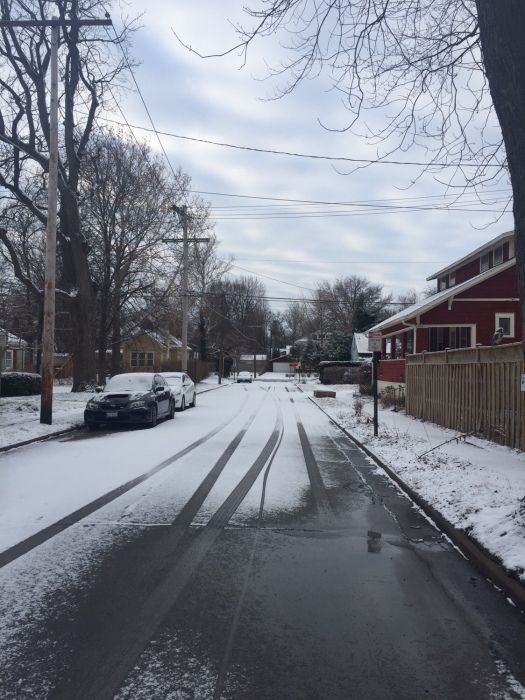 There was not much time before the Senior 2 Iyengar Yoga teacher assessment for which I was volunteering as a student this morning, but wanted at least to get on the bike and check in with the world outside.

Noticed that a lot of sweegum fruits had fallen recently.

Tried not to think of them as perilous ball-bearings, but did avoid them as best I could.

So rode Shadow to the U of I Arboretum 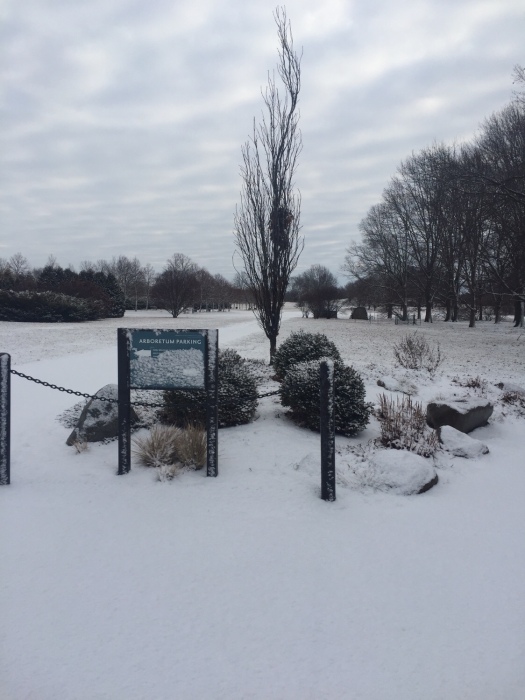 and the Japan House garden. 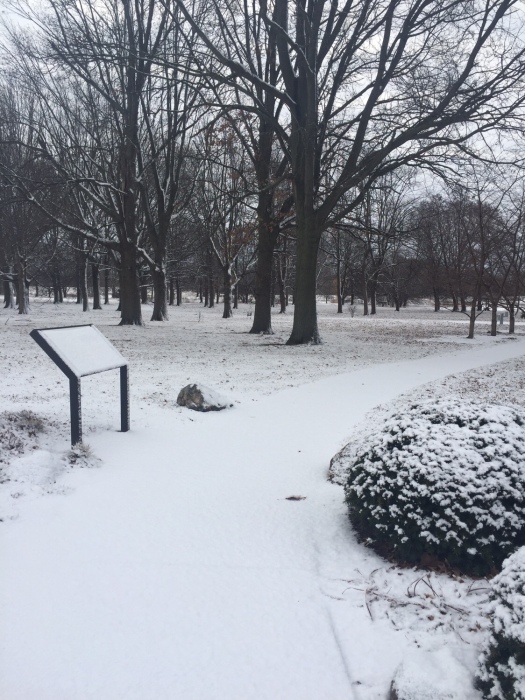 the foliage of which did seem to have sustained some damage from this winter’s low temperatures. No early February blooms this year.

Got a view of the pond with

Then turned to back toward the yoga studio, where my attention was caught by the spiky balls of sweetgum fruit,

looking like gifts of little stars hung and dangling from the otherwise bare branches.

Then headed on to the yoga institute to continue with the day, to partake of and contribute to my Iyengar yoga community.